Great Moments in Film, Uhm, I mean in digital 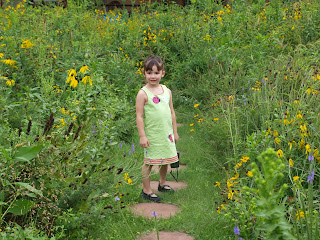 Katie in the garden at the Laura Ingalls Wilder museum in Walnut Grove, MN. She was a pistol during this visit. I should really post the picture where she is begging me to buy her a doll. Jack wasn't very happy when we went here. He had just woken up, and he needs s little time to warm up in the morning. 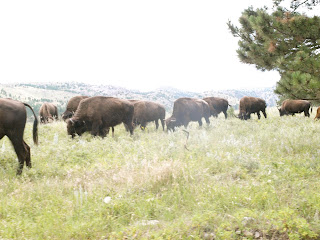 Surrounded by bison in Custer State Park. This makes it sort of hard for the kids to marvel at one bison out in the distance when you get to Yellowstone a day later. I've never been so close to so many for so long. Many of the drivers near us were from the Sturgis Rally, and on fancy schmancy motorcycles. As much as I would love one, I'm glad I wasn't  trying to ride past these bohemouths. 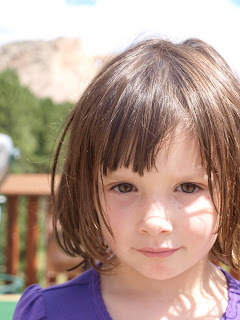 Katie at Crazyhorse. this is where we finally decided to just feed her every 40 minutes. She is growing so fast that she's cried at night because her legs hurt so much. She ate a hamburger for breakfast the day after this photo. 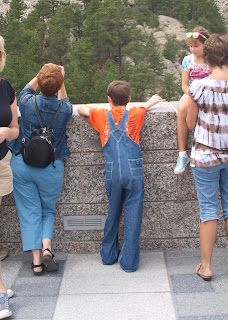 Jack at Mount Rushmore. It's hard to let go of Jack's hand, emotionally and physically. I never know when he's going to run, fast, and far away towards something dangerous, and yet, quite often, he shows us how  much he's grown, and learned. Here I let go of his hand and he calmy found a spot on the wall so he could look up at the faces carved in the rock. Notice the litte girl staring at him, to his right? She smiled at me a little, but kept staring at Jack. When he stepped away from the wall he touched her leg and laughed. 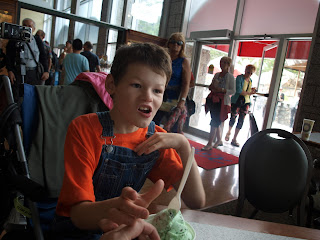 Jack eating ice cream at Mount Rushmore. We think he's had ice cream in every National Park he's ever been to. We also counted that he has had ice cream in California, Hawaii, Nevada, Washington, D.C., Maryland, New York, Ohio, Illinois, Indiana, South Dakota, Montana, and Wyoming. We didn't eat any ice cream in Minnesota, thereby ruining his track record. 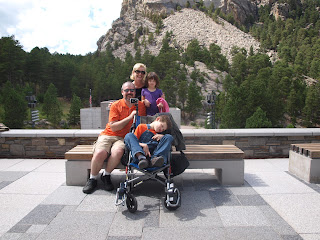 Our whole fam damily at Mount Rushmore. I could crop this, but then you'd see how dirty our faces are.
Posted by Jen Myers at 11:14 AM

thank you for sharing the post.
html color picker

Hi. We're the Myers Family. Shawn, Jennifer, Jack, and Katie. Jack is 9 1/2 and Katie is 4. Travel is always an adventure with children, and vacationing with our kids is nothing if not interesting. This site will document our travel across the country from California to Maryland and back to California, for a start, and hopefully offer more information from our own journeys as well as travel tips from our friends.

Katie is a precious girl, a delight, full of compassion, or she is a punk, a four-year old going on 14. Jack has a great sense of humor for a non-verbal kid. He has autism and cerebral palsy and a few other little things like a panic disorder and some major sleep issues.

We love to travel, but have found that traveling with autism can be quite a challenge. We hope our experiences can help someone else have an easier go of it.